FORT SMITH — Sebastian County’s Ben Geren Golf Course is on track to break even this year in the face of a summer marked by triple-digit heat indexes and a lack of rain.

Paul Wanstreet, the course’s marketing/pro shop manager, told the County Parks Advisory Board at its meeting on Monday that the course’s revenue for the year is so far ahead of what it was during the same period in 2021. The golf course earned $441,603 as of June 30, a 9.3% increase from the $404,051 generated from January to June last year.

Wanstreet said he feels good about rising to near double digits with the current heat affecting the river valley. Operations at the golf course and the region as a whole were also impacted by freezing conditions in February and the heavy rains and flooding that followed.

“As I’ve said many times, when the weather is nice, we get busy, really busy,” Wanstreet said.

County Judge David Hudson said he was monitoring the performance of the Ben Geren Golf Course. The 2022 county budget includes $862,569 for the golf course and pro shop. It is financed by the county’s general fund.

Golf course expenses for the first six months of the year totaled $378,232, according to Jay Randolph, county park administrator and course superintendent. The golf course also made an additional $14,454 from the gas well at the site, which, combined with the $441,603, brings its year-to-date profit to $77,825 so far.

Wanstreet said golf course revenue includes what the course generates through avenues such as green fee passes, golf cart rentals and driving range, in addition to money from sales of the pro shop and concessions.

Wanstreet said Thursday the increase is indicative of people who played at the golf course last year and decided to pay the annual fee with the intention of playing frequently this year.

“When we see the annuals increasing the way they have, it’s a good sign for us that people like the golf course, and they’re going to be playing here a lot over the past year, and the numbers for the previous year weren’t all that bad,” Wanstreet said.

He said part of the decline in revenue from regular green fees can be attributed to many people who would have paid for them last year by buying annual passes for this year. He doesn’t think the golf course will sell many more annual passes through December, given that they’re valid for a calendar year, rather than a year from when they were purchased.

Randolph said Monday while the course is used by guests in the mornings and evenings, the afternoons are “dead” from the heat. The golf course may consider introducing a special rate to promote evening play if things get worse. The course used this tactic when similar periods of high temperatures occurred in the previous two decades.

“We’re definitely not there yet,” Randolph said. “I’m not saying we would do that, but it’s hot.”

Sebastian County is one of 55 counties in Arkansas with burning bans in effect as of Thursday afternoon, according to the Arkansas Forestry Commission website. The county burn order, issued Monday by Hudson, cited extremely dry conditions.

Randolph said Thursday that a “twilight rate” would offer reduced green fees after 5 p.m. Regular play for 18 holes of golf and a cart costs $34 Monday through Thursday and $40 Friday through Sunday, according to Wanstreet.

Wanstreet said those who have used the golf course this year have praised its overall condition. He noted the organizers of tournaments hosted by the course, as well as corporate and charity outings, all already signed up to host events there next year to lock in their dates. This includes Forsgren, the Greater Fort Smith Association of Home Builders, Next Step Homeless Services, Fort Smith Boys & Girls Clubs, and the Fort Smith Board of Realtors.

“The course condition has been spectacular,” Wanstreet said. “Usually what they mention is the greens, and the greens have been really great. For those people working the golf course in this weather and all, they’re doing a great job.”

The Ben Geren Golf Course has three nine-hole greens for a total of 27 holes, according to the Sebastian County website. These include the Silo, Magnolia and Willow courses.

Duke Welsh emerges from a bunker on Friday, July 15, 2022, at hole no. 4 Willow at Ben Geren Golf Course in Fort Smith. Paul Wanstreet, marketer and manager of the golf course’s pro shop, told the Sebastian County Parks Advisory Board at its meeting on Monday that the course had generated $441,602 in total revenue this year as of June 30, an increase of 9.3% from January to June 2021. Visit nwaonline.com/220717Daily/ for today’s photo gallery. (NWA Democrat-Gazette/Hank Layton) 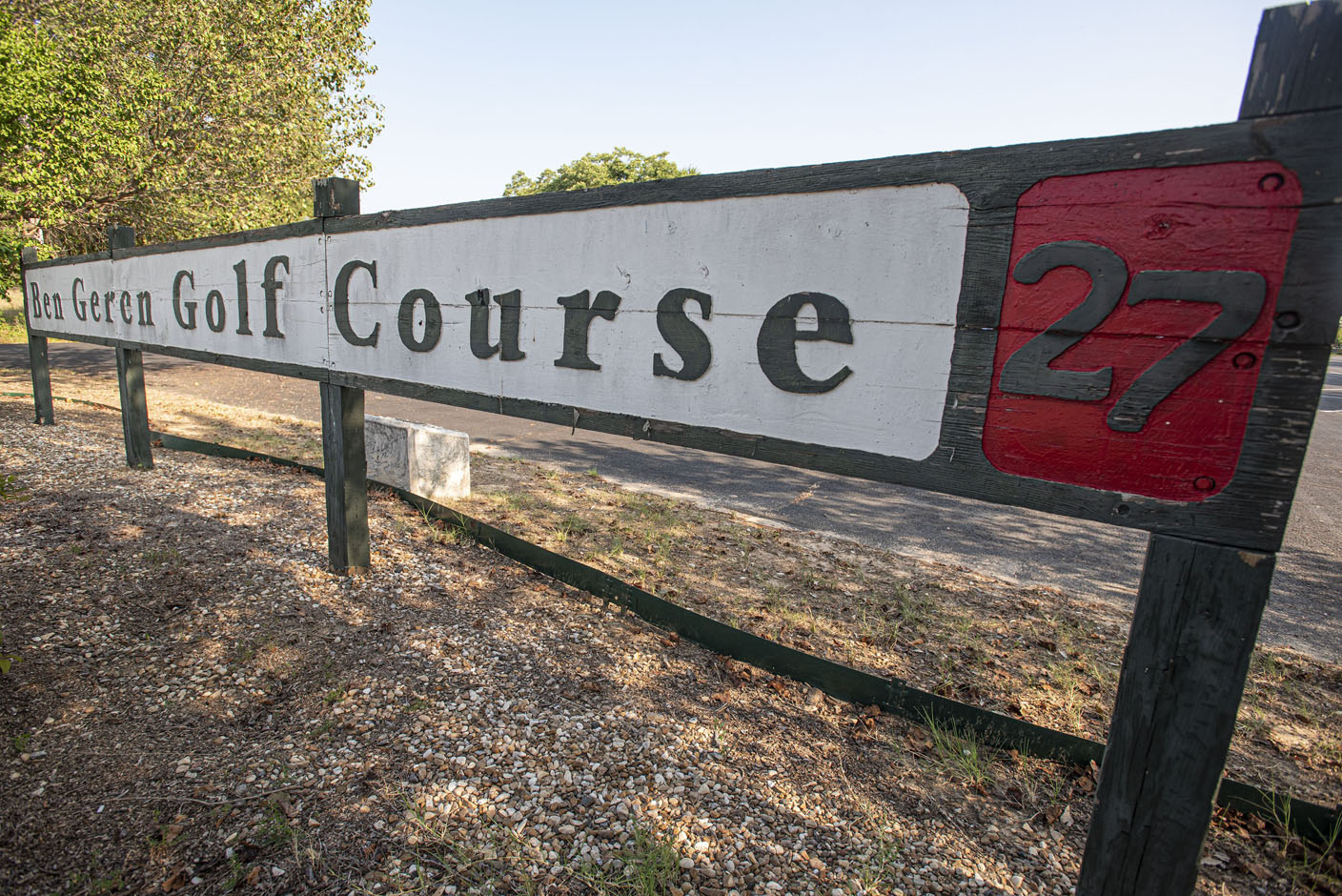 A sign welcomes visitors Friday, July 15, 2022, at the entrance to Ben Geren Golf Course in Fort Smith. Paul Wanstreet, marketer and manager of the golf course’s pro shop, told the Sebastian County Parks Advisory Board at its meeting on Monday that the course had generated $441,602 in total revenue this year as of June 30, an increase of 9.3% from January to June 2021. Visit nwaonline.com/220717Daily/ for today’s photo gallery. (NWA Democrat-Gazette/Hank Layton)